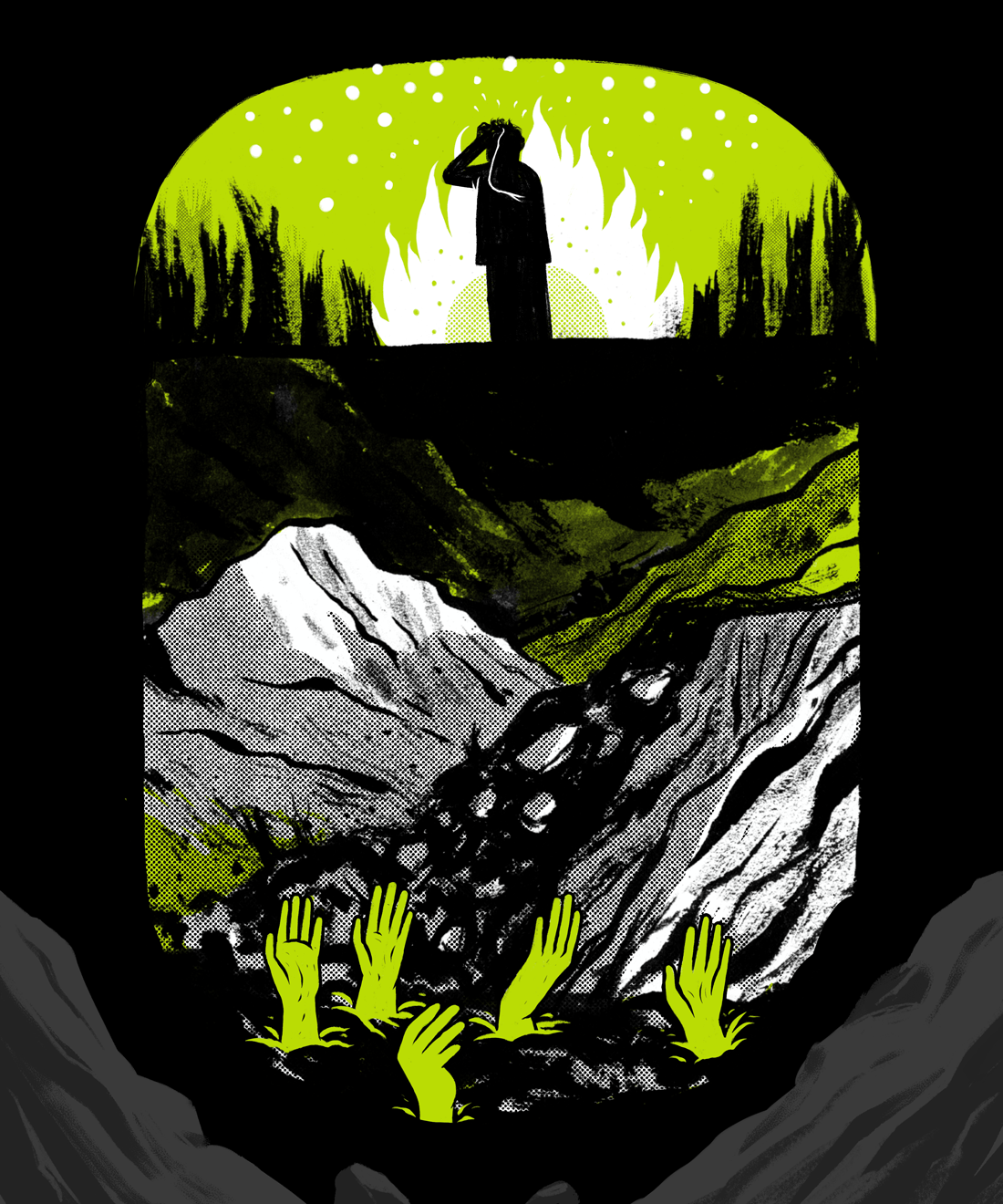 A Youth-led Struggle for Survival in
the West Himalayan District of Kinnaur,
Himachal Pradesh

Manshi Asher is a researcher-activist and co-founder of the Himachal-based Himdhara Collective. She has been working and writing on social and environmental justice issues for more than two decades. She has been documenting the impact of hydropower projects and community responses in Himachal since 2009. Her home is in Kandwari village in the Dhauladhar valley of Kangra. She enjoys engaging with feminist political ecologies of life in the mountains.

Alice A. Barwa completed her MA in Education from Dr. B.R. Ambedkar Univerity, Delhi (AUD), in 2022, and is from the Oraon Adivasi community, a native of Chhotanagpur Plateau, Chhattisgarh. She has been an advocate for Adivasi rights and voices as a member of an Adivasi youth collective @TheAdivasiPost, and has been an Adivasi youth representative at UN Climate Change Conference in Glasgow, Scotland, in 2021. Her research interests include education, culture, sociology, and linguistics.

Standing at the precarious rubbly edge of the National Highway 5 in Kinnaur, Himachal Pradesh, Bansilal Negi stared down the steep slope leading to the Sutlej River. He seemed to be conjuring up images from a year ago, recreating the fateful scenes of human bodies being removed from the mountain mass that descended (loomed) from above. He was one of the many locals who had worked shoulder-to-shoulder with the National Disaster Response Force (NDRF) team as part of the week-long rescue operation that had followed a massive landslide at a place called Nigulsari on 11th August 2021. The disaster had killed 28 people, most of them residents of the valley.

Bansilal, now in his late 30s, is a regular part of rescue efforts in this precipitous Himalayan landscape, now known for frequent landslides and flash floods. He says bitterly, “Paharon mein dhank aati hai to niche se upar dekhna hota hai, upar se niche nahi. Par hum local logon ki kaun sunta hai?” (“The mountains have a steep overhang, so we are supposed to have a perspective of looking up, not down. But who listens to us local folks?”) He also has strong comments about the failures of the bureaucracy and the political representatives from the region, and all that they could have done to save more lives after the landslide. The tragedy had been triggered when a bus, parked on the side of a sloped road, had given way and rolled into the valley. In the initial hours after the accident, the rescue work had focused on removing trapped vehicles by clearing the debris off the road and chucking it down the mountainside. This had buried the bus deeper into the muck. Bansilal can still recollect clearly the pain of the family members identifying the mutilated bodies of their loved ones.

A series of colorful prayer flags now flutter at the disaster spot in Nigulsari, silently humming chants of peace and freedom in memory of the departed souls. Two-year-old Vanshika is one of them. Till the morning of the day of the accident, she had been with her mother, 24-year-old Sangeeta, who had temporarily moved back into her maternal home in Chaura village due to problems with her in-laws. On the morning of 11th August, Sangeeta’s mother-in-law and sister-in-law had visited her home and decided to take the child with them, despite her reluctance. The Sumo they had boarded was one of the vehicles hit by the landslide. All three lost their lives. Sangeeta does not recall much of the following two days, except about dealing with her distraught husband and seeing Vanshika’s body, which was found at noon a day after the tragedy. “There was no scar or injury on her,” she says as she pulls out her phone to show a picture of the happy toddler. Sangeeta now grieves not just her little daughter’s loss but also the estrangement from her husband and the breakdown of their love marriage. “He blames me and I hold him responsible; we may not be able to live together ever again,” she says softly.

The damming of a valley

A common belief is that time heals. But in Kinnaur, deadly disasters have become permanent parts of the local collective memory and the wounds. “A rockfall here or a landslide there used to occur earlier, but not as frequently as it does now, and with this kind of human impact,” says Mohan Negi from Nichar village. The term ‘natural disaster’ has become a trigger for the people here – they bear the brunt of the massive land use and the underground excavation for large-scale hydropower dam construction in this topographically complex and sensitive region. Currently, Kinnaur is home to over 30 large and small projects, producing close to 4,000 MW of power in the state, driven by the demand for ‘clean energy’. Residents attribute the Nigulsari landslide to the 1,500 MW Nathpa Jhakri hydroelectric dam project. “A 27-kilometre-long tunnel runs underneath the mountain from here, carrying the waters of the Sutlej. Chambers the size of four football fields are right below us,” says Mohan.

Sunil, 35, is a resident of Nichar and the chairperson of the block panchayat. “The project was finished in record time by employing heavy-duty dynamiting, violating all scientific principles and safety measures. We may have been about 15-years-old then and till date have vivid memories of the doors vibrating and window glass breaking during the blasting. Roads caved in and houses developed cracks; we had to repair them year after year,” he says.

Two high-frequency transmission lines run across villages in this belt – one is for the 300 MW Baspa dam that cuts through orchards and residential areas of several villages, and the other is for the 1,000 MW Karchham Wangtoo project that cuts through the forest at the ridge. Together, they have swallowed over 4,500 trees. Walking about the stumps of an axed-down cedar forest, Sunil recalls, “I left my job in the Merchant Navy in 2012 due to a serious illness. The day I returned home, I found out that the deodar trees were being felled. I could not eat or sleep for the next two or three days. We used to play here as kids.”

Coping in a shifting landscape

For the youth here, the trauma of alienation and betrayal runs deep. They live through rapidly-shifting times, of which the unfolding impact of this ‘development’ is one albeit critical element. Earlier, the ‘common’ (polyandrous) family system used to keep family sizes smaller and the land undivided. While a few household members tended to the land, others went sheep and cattle-grazing. These traditional socio-economic systems are now shifting and the youth without jobs are frustrated, sometimes turning to substance use to cope. “Our elders agreed to this ‘development’ because they had dreams of us, mostly first-generation learners, going to Solan, Shimla, Chandigarh after completing class 12,” says Sunil.

Unlike other mountainous regions, horticulture and commercial vegetable cultivation-based cash economy had gained prominence here in the past 20 years and had ensured that young men returned to the land. But with the average land-holding size at just about 5-10 bighas now, they can no longer sustain their whole families with that work, making the availability of other local employment avenues essential. Young people here lament that the ‘70 percent jobs for locals’ was an empty promise of ‘development’; fewer than 5 percent of them today have jobs or petty contracts because of the projects.

Instead, what the people have now is disruption of existing farm and forest-based livelihoods due to the dam-related activities and disasters. “When the roads were blocked last year, the harvested peas that had to reach the market started rotting. People had to pay Rs. 500 as carriage charge for every sack of peas taken by foot through an alternate route. The NH5 is our lifeline, the only road connecting the borderlands of Spiti and Kinnaur with the rest of the world,” says Vijay Negi, the young Pradhan of Chaura Panchayat.

Emerging youth resistance: ‘No Means No’

Over the last two decades, as dam-building progressed in this tribal valley, so did resistance – both in the streets and in the courts. But the two tragedies during the 2021 monsoon provoked the vibrant youth from Upper Kinnaur to up the ante. Among the resisters is 20-something Sunder, who left a bank job in Zirakpur back in 2018. “The mundane desk work was burning me out and I knew that I belonged back here. I faced flak from family and relatives for quitting initially.” In the following two years, Sunder set out to build relationships with the community, getting involved in village matters, and pushing for basic welfare schemes like that for a link road which had been stuck in files. Through the lockdown in 2020, he participated in reviving collective farm labour practices in his village of 18 families, an experience that helped him build deeper connections with his people. Sunder teamed up with other energetic, like-minded youth from neighbouring villages to push their leadership in the local panchayat. “Political parties approached us but we were here for the community work and to foster the spirit of co-operation, not their narrow agendas.” He was elected president of the youth club in his village, Khadra in 2020.

Around this time, news had spread of an upcoming dam that Sunder’s Panchayat, along with five others in the Moorang tehsil, were to be impacted by. For Buddha Sain, who hails from the other affected Panchayat of Jangi, the proposed project raised existential questions. “Tribal laws grant power to the gram sabhas to make such decisions,” he observes sharply. In April 2021, the proposed 804 MW Jangi Thopan Project, to be constructed by the Satluj Jal Vidyut Nigam (SJVNL) which had also built the Nathpa Dam, was opposed openly at a public meeting in Jangi. Under the leadership of the youth clubs and guided by the gram sabhas, mahila mandals, and village elders, the project survey was blocked. Since then, a by-election boycott has been organised as well as several village assemblies where the youth in their thundering speeches have challenged the government’s blatant disregard for public opinion.

It is this grassroots movement, preceded by a decade-and-a-half-long struggle of the Kinnaura people, that lies at the foundation of the clarion call of “No Means No” spreading through the district, including in lower Kinnaur. “Upper Kinnaur is way more geologically sensitive and not suited to this kind of construction. We are all part of the movement,” says Sunil from Nichar. Young, local social media influencers from Kinnaur threw their creative weight behind the resistance but the campaign was never restricted to just digital activism. Slogans to halt further construction of dams reverberated from a rally at the district headquarters of Reckong Peo on 26th August 2021. In Kinnaur, cars with stickers, walls with posters, and young people wearing tee-shirts with the message ‘NO MEANS NO’ written in the bold font can now be spotted.